The MWIR imager will be designed to achieve 3.5m GSD and to fit into a small and low cost agile platform with a launch mass of approximately 130kg to address the future demands of the evolving Earth Observation constellations market.

The collaboration will exploit Leonardo’s world leading material growth and hybridisation techniques already employed in other space programmes and SSTL’s extensive experience in the use of Commercial-Off-The-Shelf-Technologies for commercial space missions.

The detector assembly will make use of Leonardo’s MWIR detector, a high performance integrated detector cooler assembly with an array of pixels on an 8um pitch – the smallest thermal mid-wave infrared pixels commercially available in the world. The detector will be re-configured with a longer life, lower vibration COTS split linear Stirling engine cooler and new electronics to provide the interface between the detector and the imager. 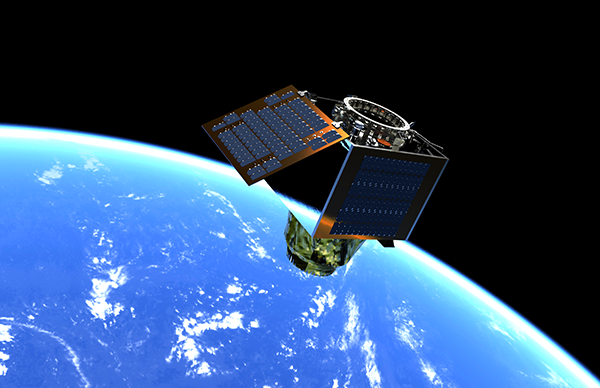 Successful completion of the detector assembly will enable it to be flown on a future demonstration mission from SSTL, targeted for a 2021 launch.

“This new technology is a game-changer for Earth Observation applications. Whereas previously the market has been focussed on a fairly small range of wavebands, there is now increasing demand for mixed sensors and complimentary data sets. Building on our successful Carbonite range of spacecraft this new technology will enable us to do the same for thermal imagery as we have done for visible imagery – driving down the cost of entry.”

A Leonardo Spokesperson said: “We’re excited about this project with SSTL and we anticipate it will lead to a dynamic partnership in the years to come. As a world leader in the design, development and manufacture of IR detectors, Leonardo’s IR detectors have the potential to make a substantial contribution to global environmental earth observation, due to their ability to yield highly accurate information which provides both quantitative and qualitative data.”

“The detectors have already been successfully used for the measurement of the temperature and water vapour profiles of the Earth’s atmosphere for Meteorology, and can also be used to measure greenhouse gases, clouds, aerosols, ozone and trace gases. Leonardo can deliver improved accuracy and confidence in instrument data, since the current generation of detectors have emerged from a rich heritage of cooled and uncooled IR Detector production which spans over 60 years of innovation.”

The Earth Observation applications sector has grown in recent years with an increasing demand for high resolution and temporal imagery, however the majority of currently available satellite imagery is in the visible waveband and is captured at mid-morning or mid-afternoon local time due to reliance on good illumination conditions.

MWIR imagery overcomes this limitation as the detectable signal depends on temperature at the scene, enabling imaging at any local time. It also provides the capability to differentiate between objects and surfaces of different temperatures, providing complementary information to traditional optical imagery and the opportunity to image into the night time.

A primary use for MWIR image data is expected to be for defence and security applications in conjunction with optical assets and change detection algorithms; for instance, with the right target location conditions it should be possible to derive information on recent activity in a scene to detect recently used or moved vehicles.

The high resolution MWIR data will be of immediate use to many current spatial applications due to the overlapping resolution with visible data. Applications include disaster support where for instance the effect of suppression and management of active fires can be monitored, and also mapping of urban areas to provide monitoring of heat, waste and pollution from industrial installations.